There was once a time when we were secure in the belief that only God could control the weather.

He makes clouds rise from the ends of the earth;
He sends lightning with the rain
And brings out the wind from His storehouses.
~ Psalms 135:7

And then came HAARP. 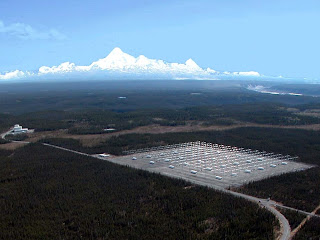 The innocent sounding acronym stands for High-frequency Active Auroral Research Program. Located in remote Gakona, Alaska, the HAARP facility is highly guarded.  Although the status is “unclassified”, even the website has a harsh warning (a “Cautionary Statement” ) to let readers know that by accessing the site, they are being monitored.  HAARP is operated by the US Air Force.
HAARP for Dummies
HAARP presents itself as a communications research facility.  The website states: “HAARP is a scientific endeavor aimed at studying the properties and behavior of the ionosphere, with particular emphasis on being able to understand and use it to enhance communications and surveillance systems for both civilian and defense purposes.”

HAARP will zap the upper atmosphere with a focused and steerable electromagnetic beam. It is an advanced model of an "ionospheric heater." (The ionosphere is the electrically-charged sphere surrounding Earth's upper atmosphere. It ranges between 40 to 60 miles above the surface of the Earth.)

Put simply, the apparatus for HAARP is a reversal of a radio telescope; antenna send out signals instead of receiving. HAARP is the test run for a super-powerful radiowave-beaming technology that lifts areas of the ionosphere by focusing a beam and heating those areas. Electromagnetic waves then bounce back onto earth and penetrate everything -- living and dead.

Don’t Worry: Poking Holes in the Atmosphere is Harmless

The ionosphere is the protective layer of our atmosphere.  The only reason that life is possible on the planet is because the ionosphere keeps the sun’s radiation, “solar wind”, from reaching the earth.

We are reassured by the de facto government, the Department of Defense and the US Air Force that poking 20 mile holes in the ionosphere to  control the weather communicate with satellites and submarines is completely harmless.


You don’t have to be a nuclear physicist to see that this is a very bad idea.  HAARP is the tool that could trigger an extinction event.

The Real Scoop on HAARP’s Capabilities

A look at one of the patent applications tells us the unadvertised possibilities of this system. This patent is from ARCO Power Technologies Incorporated (APTI) the contractor that built the HAARP facility in Alaska. (APTI is owned by the Atlantic Richfield Company, one of the world’s biggest oil companies.)

·        "Thus, this invention provides the ability to put unprecedented amounts of power in the Earth's atmosphere at strategic locations and to maintain the power injection level particularly if random pulsing is employed, in a manner far more precise and better controlled than heretofore accomplished by the prior art, particularly by detonation of nuclear devices of various yields at various altitudes... "

·        "... large regions of the atmosphere could be lifted to an unexpectedly high altitude so that missiles encounter unexpected and unplanned drag forces with resultant destruction."

·        "Weather modification is possible by, for example, altering upper atmosphere wind patterns by constructing one or more plumes of atmospheric particles which will act as a lens or focusing device.

... molecular modifications of the atmosphere can take place so that positive environmental effects can be achieved. Besides actually changing the molecular composition of an atmospheric region, a particular molecule or molecules can be chosen for increased presence. For example, ozone, nitrogen, etc., concentrations in the atmosphere could be artificially increased."

The words in this patent make the sinister intents of HAARP very clear.  The USAF intends to control the weather.

This brings into question the meteorological anomalies that have been occurring the world over.  Unprecedented numbers of tornadoes in the United States.  Brutal winter storms in Europe coating the continent in ice.  Fifty rainstorms in a Middle Eastern desert.  And this is just the tip of the ionospheric iceberg.

Of course, the military is unlikely to have interest in technology that cannot be weaponized.  The fact that the Alaskan HAARP facility is a USAF facility is evidence enough that the intention exists to use this either offensively, defensively, or both.

You may be wondering, “How could weather be used as a weapon?”

Not only can HAARP technology cause severe weather to occur, it can stop naturally occurring weather that the ecological system requires to maintain itself.

Using this technology, weather systems could be pushed and relocated, causing devastating droughts in agricultural areas.  The weather could be changed in delicate ecosystems like rainforests.  Freezes could be forced in the middle of the summer growing season.  The detrimental effects on agriculture could cause a massive die-off from starvation.

Weather has now been harnessed as a weapon.

Taking it a step further, if an enemy is hit with a devastating batch or tornadoes or a hurricane, they will be able to do little to fight back – they will be occupied with trying to survive the attack of Mother Nature – except in this case, it’s Mother Nature’s evil twin who is acting.

There is a great deal of speculation about HAARP-induced earthquakes and volcanic eruptions.  This video explains how the resonance theories of Nicola Tesla could be used to cause devastating earthquakes like the catastrophes in Haiti, Japan, and Chile.


It’s open for debate, of course, but if the masterminds in control of HAARP are responsible for the earthquake in Japan, they aren’t just responsible for the immediate deaths from quake damage and the tsunami.  The radiation released as a direct result of the earthquake will cause ongoing deaths, as we in the Northern Hemisphere strive in vain to avoid tainted foods and water.

If depopulation and eugenics is the master plan, HAARP could be the ideal tool to enact that plan.

Whose Finger is on the Button?

The Department of Defense of our de facto government is in control of the mind-boggling power of this technology.  This means our Commander in Chief, Barack Obama (who dances to the commands of puppetmasters like AIPAC and the United Nations) is ultimately the one with his finger on the button.

Barack Obama, who already fancies himself as the King of America, has the power to issue a command that could cause an extinction level event.

One of these days, our arrogance will be repaid a thousand fold when the weather strikes back.

Just because we can change the weather doesn’t mean we should.