New Executive Order: We Can Take Anything from Anyone at Any Time 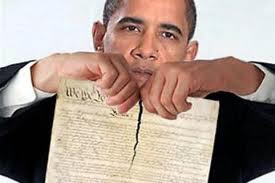 Like every "act" or "order" passed of late, the name is a completely misleading piece of false-patriotic propaganda.

It should be called the "We Can Take Anything from Anyone at Any Time" order, because that is exactly what it boils down to.

The general function of the act is this:

Executive departments and agencies responsible for plans and programs relating to national defense...or for resources and services needed to support such plans and programs, shall identify requirements for the full spectrum of emergencies, including essential military and civilian demand.

This means that any department of the government that is responsible for any item or service, either for the military or the general populace, can make a determination of what the needs of the country are.  The "full spectrum of emergenices" means that this is not specific to times of martial law.


be prepared, in the event of a potential threat to the security of the United States, to take actions necessary to ensure the availability of adequate resources and production capability, including services and critical technology, for national defense requirement.

This means that if you own a factory that produces something the government "needs", your facility can be co-opted to produce the goods required.  People can be forced to work to provide these items.

A committee, headed up by the Secretary of Homeland Security, Janet Napolitano, "shall serve as the integrated policymaking forum for consideration and formulation of national defense resource preparedness policy and shall make recommendations to the President on the use of authorities under the Act."

The Secretary of each agency...shall plan for and issue regulations to prioritize and allocate resources and establish standards and procedures by which the authority shall be used to promote the national defense, under both emergency and non-emergency conditions.

And this brings home "anything at any time".
This is followed by a big section on defense spending and allocation of funds (more spending), as well as what reports need to be written.
Then the order discusses "labor requirements" of the "national workforce".  Some of the new responsibilities of the Secretary of Labor, Hilda Solis, are as follows:
This means that you can be compelled to work at a specific job if the government deems it necessary.  Further, they can put you in the military, even though we currently have no active draft.
A decision-making committee has been formed.  Pay attention, because these are the folks that can take your things, commandeer your business and make you work wherever they choose, whenever they choose.
The Secretary of State
The Secretary of the Treasury
The Secretary of Defense
The Attorney General
The Secretary of the Interior
The Secretary of Agriculture
The Secretary of Commerce
The Secretary of Labor
The Secretary of Health and Human Services
The Secretary of Transportation
The Secretary of Energy
The Secretary of Homeland Security
The Director of National Intelligence
The Director of the Central Intelligence Agency
The Chair of the Council of Economic Advisers
The Administrator of the National Aeronautics and Space Administration (NASA)
The Administrator of General Services
Finally, Part VIII of the order defines the general provisions- the items and property of American people which can be taken from ﻿them under the scope of this act.  It is simply astounding in it's breadth of definitions.
By the authority vested in me as President by the Constitution and the laws of the United States of America...
Signed,
BARACK OBAMA
THE WHITE HOUSE,
March 16, 2012
This Executive Order was quietly signed on Friday afternoon.  It is the death warrant of private property in the United States.  An Executive Order, by definition, does not require congressional approval.  A president can use it to set a policy and avoid all public debate and opposition.
This is nothing more than a foundation for the establishment of peace-time martial law.  The President and his buddies are no longer trying to hide behind a facade of democracy.  HE IS INTENT ON COMPLETE CONTROL.  No president, not even Bush, with the unPatriot Act, has done more damage to the Bill of Rights than Barack Hussein Obama. His utter contempt for the property and liberty of the American people, the Constitution and the Bill of Rights is positively unmatched in the history of this country.
NOTE TO READERS:
It remains to be seen if the bought-and-paid-for mainstream media will publicize this outrage - nearly two days after the fact there is little to be found in a Google search, so my hopes aren't high.  Don't let the current de facto government sweep this under the rug - let's make it our responsibility to spread the word on this.
Obama and his minions aren't done yet.
Thank you to Possee!﻿
Posted by Daisy at 07:02