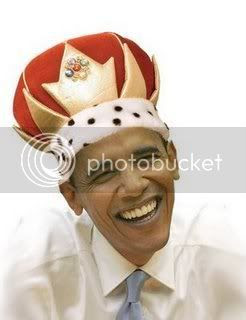 Someone needs to take away Barack Obama's pen.

During his three year "reign", he has signed 113 Executive Orders.

What exactly is an Executive Order?  The Merriam-Webster dictionary defines it for us:


A rule or order issued by the president to an executive branch of the government and having the force of law.
Obama has made no secret of his contempt for Congress, rule of law, and the Constitution.  By using Executive Orders to create laws, he is writing his own rule book.  Executive Orders do not have to clear either the legislative branch or the judicial branch.  Executive Orders have the "force of law" with the mere swipe of Obama's ball point.
Several of his royal decrees Executive Orders have been deliberate attacks on the Constitution, most recently the NDRP order, which means our stuff is no longer our stuff- it's his stuff anytime he wants it.  Here are a few other notable EOs signed by Obama that hint at preparations for the establishment of martial law.
REVIEW OF DETENTION POLICY OPTIONS
There shall be established a Special Task Force on Detainee Disposition (Special Task Force) to identify lawful options for the disposition of individuals captured or apprehended in connection with armed conflicts and counterterrorism operations.
CLASSIFIED NATIONAL SECURITY INFORMATION
...the national defense has required that certain information be maintained in confidence in order to protect our citizens, our democratic institutions, our homeland security, and our interactions with foreign nations.
ORIGINAL CLASSIFICATION AUTHORIZATION
I hereby designate the following officials to classify information originally as "Top Secret" or "Secret".....
ESTABLISHING COUNCIL OF GOVERNORS
When appointed, the Council will be reviewing such matters as involving the National Guard of the various States; homeland defense; civil support; synchronization and integration of State and Federal military activities in the United States; and other matters of mutual interest pertaining to National Guard, homeland defense, and civil support activities.
NATIONAL DEFENSE RESOURCES PREPAREDNESS
.....shall be prepared, in the event of a potential threat to the security of the United States, to take actions necessary to ensure the availability of adequate resources and production capability, including services and critical technology, for national defense requirements;
But the real Executive Order itinerary has nothing to do with the Constitution and everything to do with Obama's good friends at the United Nations.  He has signed with a flourish numerous Executive Orders to promote the warm, fuzzy blueprint laid out by the UN's Council on Sustainable Development.
Barack Obama is the star quarterback for Team Agenda 21.  With the feel-good names we've learned to expect from Agenda 21 proponents, he has enthusiastically signed a wide range of orders that imply empowerment and brainwashing  education of target demographic groups and promote community based group hugs.
Establishment of the White House Office of Urban Affairs ﻿
Federal Leadership in Environmental, Energy and Economic Performance
﻿Stewardship of the Ocean, Our Coasts, and the Great Lakes
White House Council for Community Solutions
Chesapeake Bay Protection and Restoration
Increasing Participation of Asian-Americans and Pacific Islanders in Federal Programs
Promoting Excellence, Innovation and Sustainability at Historically Black Colleges and Universities
Establishment of the White House Rural Council
Interagency Working Group on Coordination of Domestic Energy Development and Permitting in Alaska
Improving American Indian and Alaska Native Educational Opportunities and Strengthening Tribal Colleges and Universities
Instituting a National Action Plan on Women, Peace, and Security
Establishing the President's Global Development Council
Establishing a White House Council on Strong Cities, Strong Communities

It appears that legislating the old-fashioned, Constitutional way - you know - having the proposed laws go through the House and the Senate first - has become passe.  Obama, in his arrogance, has decided to by-pass the Congress and just make the rules himself.

"We can't wait for Congress to do its job. So where they won't act, I will.  We're going to look every single day to figure out what we can do without Congress."

It certainly appears that King Obama has figured out that he can do an awful lot without that pesky Congress.
Posted by Daisy at 16:43